Clubs across the Premier League are desperately trying to improve on their squads before the end of the transfer window and so, given DataConsulting’s Yorkshire roots, our analysts Tom and Levi decided to take an in-depth look at a couple of the additions made by our local clubs:-

Following the return to Manchester United of 22 year-old Dean Henderson from his 2 year loan spell, Sheffield United signed the highly rated 21 year–old Aaron Ramsdale as his replacement for £18 million.  Like Henderson, Ramsdale is unusually young for a Premier League goalkeeper – in the 2019/20 season, the pair were the 1st and 2nd youngest goalkeepers to play at least 1,000 minutes in the league.

The two players also have a similar style of goalkeeping. The visual above shows #OPA/90 – the average number of possessions a goalkeeper makes outside his area per match, against Average Distance from Goal. As well as showing the similarity in the positions taken in a match between Ramsdale and Henderson, the graphic also shows the aggressive sweeping styles of Alisson & Ederson, as well as the more conservative style Hugo Lloris utilises. Based on this, Ramsdale should have no problem slotting in with what Sheffield United expect from their keeper.

In terms of the raw numbers, there is no real comparison between Henderson and Ramsdale – the former conceded 33 goals, compared to 62 for the latter. This pattern also exists for Clean Sheets (Henderson – 13, Ramsdale – 5) and Save% (Henderson – 75%, Ramsdale – 68%). These kind of stats can be interesting but a number of factors other than the goalkeeper’s ability can greatly affect these kind of numbers – not least a team’s defensive abilities and the tactical styles and systems used by a team.

We can measure a goalkeeper’s ability more directly using a metric known as PSxG (Post-Shot Expected Goals). Based on the actual shots that a keeper has faced, this measures how many goals an average keeper would have been expected to concede. If a goalkeeper has conceded fewer goals than expected, then he can be said to be above average.

The chart below shows each goalkeeper in the Premier League ranked on PSxG+/- as well as Cross Collection %. To illustrate the point in the previous paragraph, Martin Dubravka of Newcastle has a PSxG+/- of around +10, this means that if an average goalkeeper had faced the same shots as Dubravka, then they would have been expected to concede 10 more goals in the season than Dubravka. The opposite is true of Kepa Arrizabalaga, who conceded 10 more goals than expected.

As the chart shows, Dean Henderson outperformed the average by around 5 goals over the course of the season, while Ramsdale performed in line with expectations. Ramsdale also has a way to go to reach Henderson’s levels in Cross Collection %.

Overall in Aaron Ramsdale, Sheffield United have made a shrewd signing of a very young goalkeeper with similar traits to their previous keeper Henderson – however he still has a little way to go to match Henderson’s shot stopping abilities.

Leeds were left with a huge gap to fill at the back after being unable to secure a deal to bring championship-winning loanee Ben White back to Elland Road on a permanent basis. Coupled with losing Gaetano Berardi to a long-term injury, only one senior centre-back remained in the form of captain Liam Cooper.

Enter: Koch. The newly capped Freiburg centre-back had been on Leeds’ radar for quite some time, with the Whites keeping tabs for 6 months or more ahead of a potential move. Koch plays in both CB and CDM roles with Freiburg and the national team, with a solid defensive output as shown below (pAdj DA/90 : defensive actions made per 90 minutes of game time, adjusted to assume equal possession across all teams).

Where Koch really stands out, though, is in his attacking output. Leeds manager Marcelo Bielsa expects all players to contribute to each phase of play: Few centre-backs exceeded the number of shot-creating actions per match (SCA/90) produced by Koch.

With Ben White performing so well in their championship-winning season (achieving more interceptions than any other player in the top 5 leagues), Koch certainly has a big hole to fill. The numbers – and recent call-ups to the German national squad – suggest that he is ready to make the step up, and Bielsa seems the perfect man to improve any player.

Following both Jean-Kevin Augustin and Eddie Nketiah’s failed loan moves last season, Leeds were left with only one out and out striker available for the second half of the campaign – Patrick Bamford. This is a situation Leeds were keen to remedy upon their promotion to the Premier League. 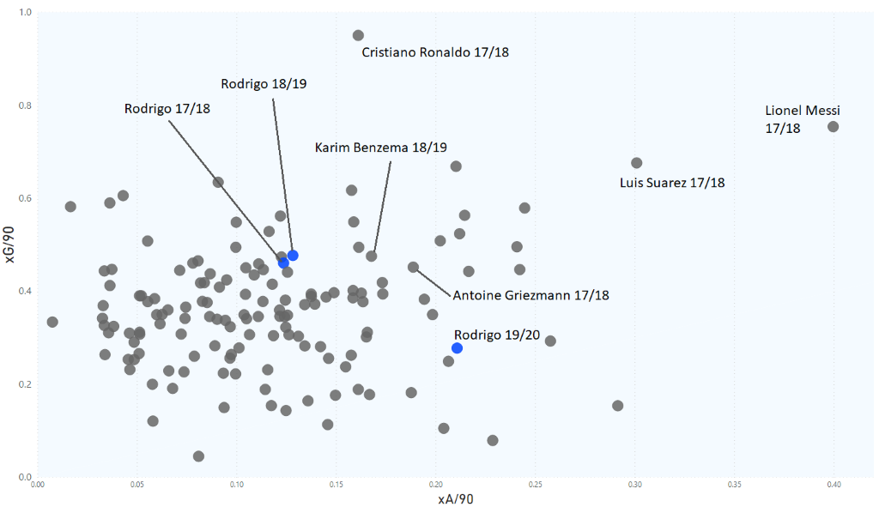 Leeds smashed their previous transfer record to sign Rodrigo Moreno – Spain’s No. 9  and a player who is able to contribute with more than just goals; something Marcelo Bielsa deems essential from his strikers.

The chart above shows xG/90 (Expected goals per 90 minutes) against xA/90 (Expected assists per 90 minutes) for strikers in La Liga over the last 3 years. xG is a metric which measures the number of goals a player can be expected to score based on the shots they have taken, while xA measures the number of assists a player would be expected to make, based on the passes they have made.

During the 19/20 season in a struggling Valencia team, fewer chances came Rodrigo’s way and his xG/90 suffered as a result. He was, however, able to increase his creative output, showing elite level chance creation in terms of xA.

If Rodrigo is able to maintain his new found chance creation, while rekindling his goalscoring abilities from the previous two seasons, then he may be able to reach the levels shown by Karim Benzema and Antoine Griezmann, labelled on the graph.

The visualisations in this piece were created in Power BI, and the data is provided by FBRef/Statsbomb.