They think it’s all over…it is now!

It’s been a long hard season but astute management, a sensible transfer policy, and one of the DataConsulting team leaving, means that Sam Ford is the winner of the 2016/17 DataConsulting Fantasy league. Congratulations to Sam!

A close second was Alex Psarras who used data analytics to pick the best team each week, and he would have won it too if it wasn’t for those pesky penalty points for making too many transfers. Propping up the table are Besjona Bega, who started off the season with good intentions, but lost interest along the way and Rob Graham whose team collapsed like a house of cards after Christmas.

In true DataConsulting style we have been following the statistics closely and Alex created these visualisations that really help to tell the story of the season.

The above heatmap really highlights the fact that the best performing managers were the ones who spent the most time analysing the stats, making transfers and tweaking their formations each week to get the maximum points. Alex’s approach almost paid off for him and he did accrue the most points over the season but his ambitious transfer policy (more than double anyone else) meant he was penalised 116 points and it was these penalty points that cost him the championship. 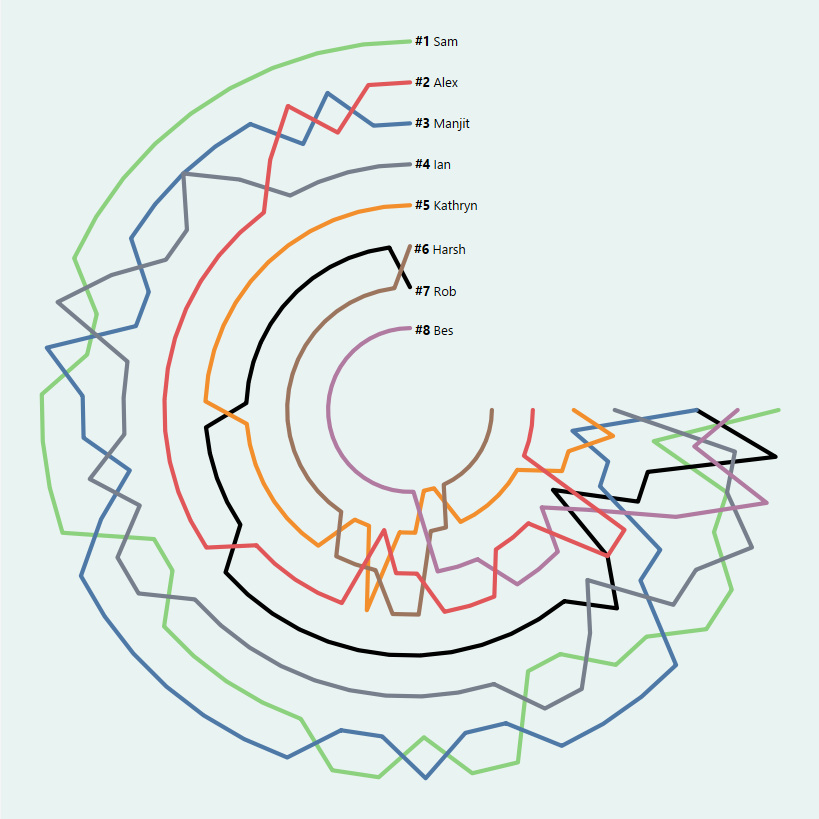 The chart to the left shows the teams performance and league standings throughout the season. Starting with week one in the right hand side the radar plots performance, clockwise, until we get the final position. It clearly shows a frenzied start when the league was new and people were spending time refining their teams before it became more of a three horse race. Manjit actually left DataConsulting in early 2017 and with his departure so went his form, allowing Alex and Sam to fight it out.

Ian used the automated pick to choose his team and still performed admirably throughout although his 27 transfers shows he wasn’t happy to let the team run itself, unlike Harshna and Bes who performed less well. Although Harshna still pipped Rob on the last day of the season to secure 6th place.

All this is well and good but there’s a big world out there and a look at the international standings makes less fun reading, even for Sam who finished in an impressive 257,307th place, almost 3 million positions above Bes.