The Premier League is Back! 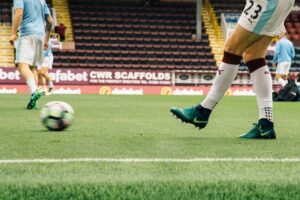 With empty stadiums, water breaks and the option for additional substitutions, it may look different, but the Premier League is back. With so much still left to play for it’s certainly going to be an interesting end to the season. In this article our analysts Levi and Tom take a look at how the teams involved have performed so far and how their style of play reflects their results.

The first graphic shows teams ranked by Average Possession and Attacking Tempo.  This measure attempts to quantify the speed at which teams create shooting opportunities.  It is defined as the number of Shot Creating Actions (dribbles, passes, crosses and fouls drawn which lead to shots) per minute of actual possession. 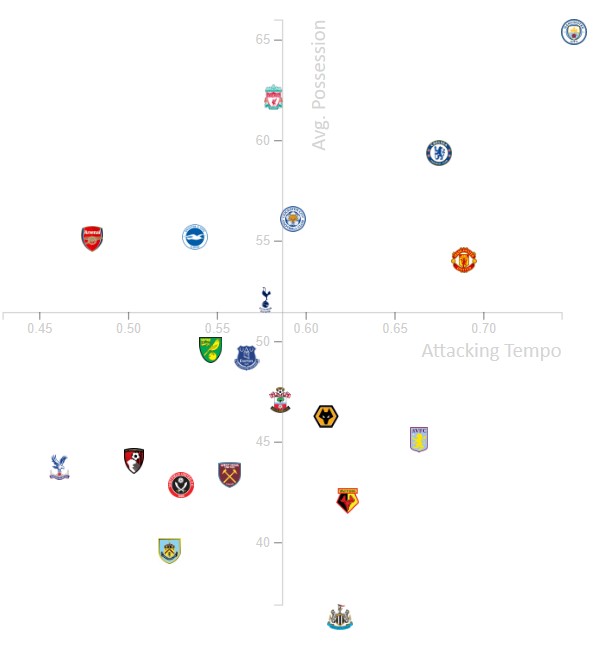 With the highest Attacking Tempo and Average Possession by far, Guardiola’s Manchester City look to dominate possession and appear to be significantly more effective at converting possession into chances than the 19 other clubs in the league. Arsenal, famed for their patient possession-based football, are struggling to recapture their former heights. Their attacking tempo exceeds only – and just barely – that of Crystal Palace.  This disparity in tempo between City and Arsenal resulted in a complete mismatch when the two sides clashed on Wednesday night, with City cruising to a 3-0 victory and a 68% share of possession.

A number of other teams also have clearly defined styles. Newcastle and Watford, for example, are happy to surrender possession for vast amounts of the game with men behind the ball, before looking to catch their opponents out with direct attacking sequences when given the opportunity.

The graphic below compares defensive styles of teams in the Premier League. A defensively Proactive team (e.g. Chelsea, Liverpool) look to win the ball in all areas of the pitch, whereas a more Passive team (e.g Burnley, Newcastle) often rely on physical superiority and organisation to prevent the opposition from creating goal scoring opportunities. A team’s Proactivity is measured by the rate at which it makes tackles, pressures and interceptions while the opposition is in possession.

xGA (Expected Goals Against) measures the goal scoring chances each team has conceded, representing the average number of goals a team may expect to concede based on those chances.

Alongside the elite teams we associate with an intense high pressing defence, Brighton, Norwich and Southampton also attempt to implement a similar style with varying degrees of success. 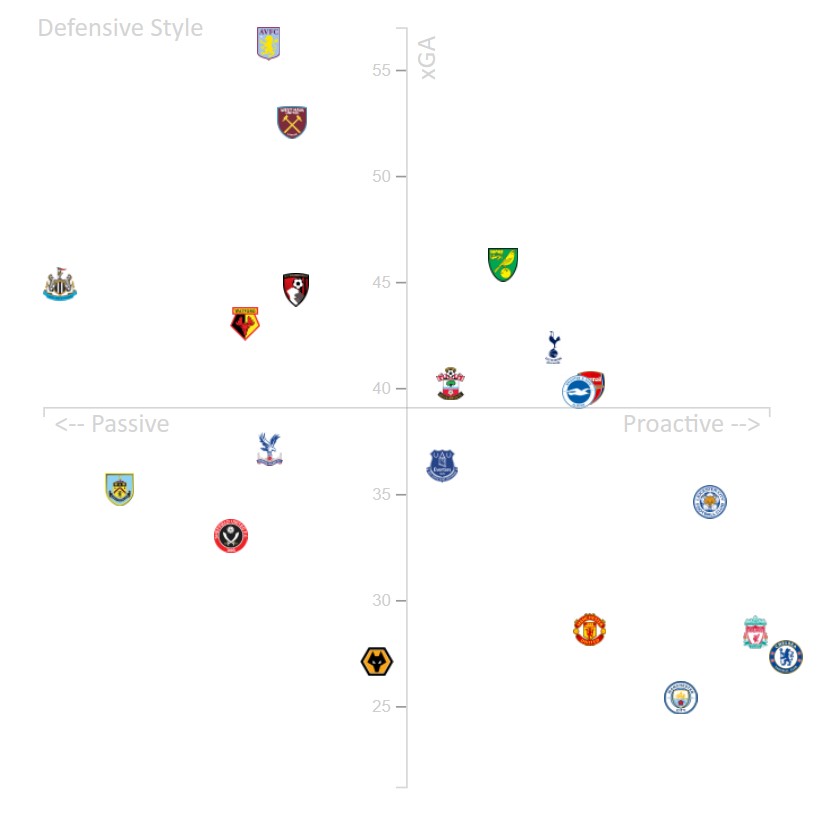 Perhaps unsurprisingly, the more defensively passive teams tend to concede more chances – four of the bottom five sides in the current standings lie within the top-left quadrant of our visual.

The likes of Burnley and Sheffield Utd have shown that teams built on a passive defence can still have success – they rely on solid, conservative and physical defences with an emphasis on organisation before firing long balls forward (1st and 2nd most in the league, respectively) to the likes of Chris Wood and Oli McBurnie to relieve pressure and spearhead attacks.

An interesting managerial trend emerges when evaluating defensive styles. Of the nine most defensively passive teams, eight are coached by British managers, whereas the more proactive teams tend to be managed by foreign coaches – Frank Lampard, Brendan Rodgers and Graham Potter are notable exceptions.

While many of the older British managers have a habit of building on a deep and physical backline, we can see the less experienced Premier League managers – like Graham Potter, Daniel Farke and Ralph Hasenhüttl – attempt to implement a more intense pressing style; albeit on a tighter budget than the likes of Klopp and Guardiola.

Liverpool’s march toward their first Premier League title has been inevitable for a while now, but does that tell the whole story?

We decided to investigate how each team has performed relative to their xG (Expected Goals) for and against. xG is a measure which calculates, based on the shots taken by a team, how many goals would have been scored on average. For example, if a team had scored 50 goals in a season, and had an xG of 40, then they would be said to have outperformed xG by 10. This can be down to a range of factors, such as consistently good finishing, bad goalkeeping, or just pure luck.

The chart below implies that Liverpool and Leicester have been clinical at both ends of the pitch, significantly exceeding the statistical expectations based on xG. Perhaps they have the likes of Vardy, Salah and Allisson to thank for this (or maybe the Football Gods decided to extend a helping hand). 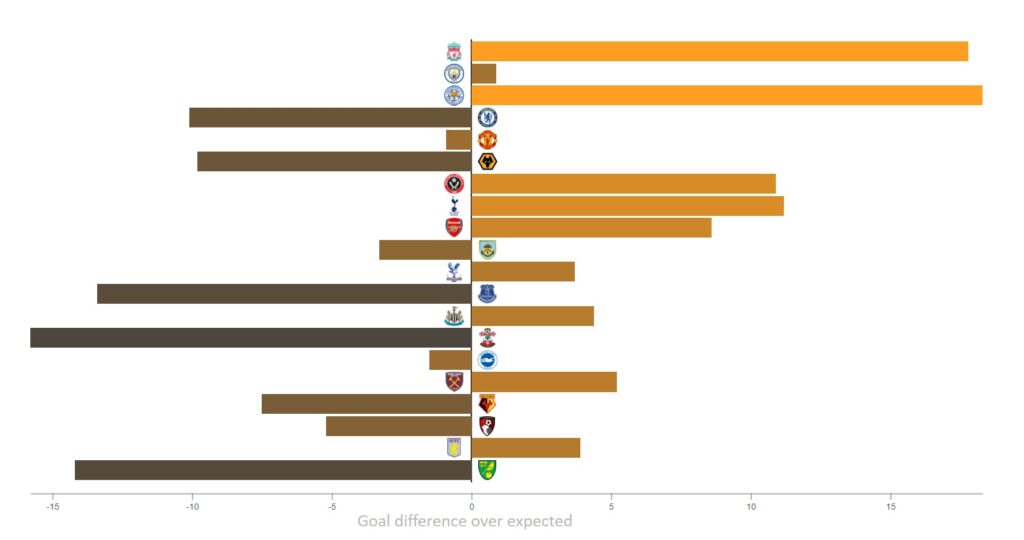 Norwich, Southampton, and Everton might consider themselves rather unfortunate, or perhaps lacking that cutting-edge when it comes to taking chances or keeping them out. It certainly appears as though their style of play should see them much better off than they are currently.

Chelsea are an interesting case: – Currently sat in fourth place and yet over 25 goals worse off than City and Leicester by our measure. Chelsea have signed Hakim Ziyech and Timo Werner to complement the already prolific Abraham next season. However, with their goals against exceeding their xGA by more than 10, they may look to shore up their defence over the summer and, with a little luck, may consider themselves as genuine contenders for the Premier League next time out.

We hope you have enjoyed reading this piece as much as we’ve enjoyed putting it together, the rest of the season promises plenty more drama and excitement.

All the visualisations in this piece have been created using d3, an open-source, free library in JavaScript which allows you to create web-based fully interactive visualisations. The data for this piece was provided by FBref, StatsBomb and TransferMarkt.

Over the coming months, we plan to release a series of more interactive and in-depth visualizations using d3 and other tools covering a range of topics. We’d love to hear your thoughts and ideas, so please feel free to get in touch at enquiries@dataconsulting.co.uk if there’s something specific you’d like to see – or if you’re interested in the potential for using this technology within your business.