The Human-Safety Side Of Big Data

The Human-Safety Side Of Big Data

Accidents can happen, especially in the world of mining, cement and materials making and construction, where anything from faulty equipment to an ill-installed fence can lead to injury or worse.

While impossible to prevent outright, there has been a movement in recent years to pre-empt and reduce physical harm caused by accident using an unlikely aid – big data.

While more commonly associated with digging deep into consumers’ profiles to figure out ways to gain market share, boost sales and generate more profits, big data is also being applied to workplace safety, helping companies get in front of potential workplace dangers before they happen.

Knowing in advance that a cement mixer or forklift is in need of repair, ensuring proper lighting and equipment is on site for a paving job, being able to respond immediately and effectively when an accident or injury occurs are all big-data-inspired changes that have helped construction giant LaFarge improve health and safety for its workers.

“Now it’s about leading indicators – tracking observations in the field and collecting data to get ahead of accidents before they happen.”

“It’s been a shift from lagging indicators to leading indicators,” says Chris Roach, director of safety and operations for LaFarge Canada Inc., part of Paris-based LaFarge, which employs 65,000 in 64 countries.

“It used to be that when someone got hurt, we would collect the data after the fact to investigate and try to prevent it from happening again. Now it’s about leading indicators – tracking observations in the field and collecting data to get ahead of accidents before they happen.” 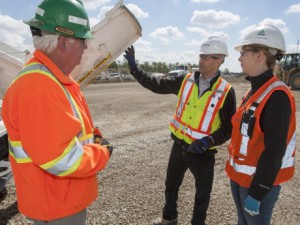 Big data and how to implement it has become the corporate focus du jour, where finding ways to collect and analyse data deeper, faster and with less paper and human interaction is supposed to lead to being more cost effective, more efficient, and more competitive – at least in theory.

“It’s about having a system in place that looks at transactions in a detailed way that hasn’t been looked at before,” says Verver.

While preventing an on-site injury doesn’t necessarily fall under the category of a “transaction”, the ability for LaFarge to collect in real time vast amounts of data ­from all different sites and projects and see what could potentially be a danger to its employees helps the company detect and prevent bad things from happening, saving both time and money, says Roach.

“If a cement plant gets shut down due to an accident, that’s a very expensive proposition,” says Roach. “We’ve seen a tremendous ability to be proactive to make things safer and more simple.”

There have been additional economic benefits as well, namely a significant reduction in costs associated with accidents: healthcare costs, to be sure, but also hidden expenditures such as time off for injured workers, extended health and long-term disability expenses, training for replacement workers, and so on. In fact, the number of accidents across Lafarge’s global operations that led to loss of time (by million hours worked) declined to 0.63 in 2011 from 8.35 in 2002, according to the company’s 2011 sustainability report.

“Many organizations are still in the early stages of experimentation and few have thought through a strategy or realized the profound impact that big data will have on organizations and information infrastructure.”

To be sure, big data is still an abstract concept, with most companies focused more on how to grab hold of data and use it to streamline operations and profitability. While not difficult to imagine the benefit of being able to collect, sift through, process and analyze massive volumes of data in real time in previously undiscovered ways, it’s still something many companies find difficult to move forward on, say Gartner research analysts Douglas Laney and Frank Buytendisk.

“Through our customer interactions, questions have shifted from ‘What is big data?’ and ‘Why should I care?’ to ‘What is the ROI?’ and ‘What are the organizational changes and skills required?’ they note in a research report. “Yet many organizations are still in the early stages of experimentation and few have thought through a strategy or realized the profound impact that big data will have on organizations and information infrastructure.”

That includes how it might help make life safer and more secure for workers.

“You can’t predict how many accidents you could have prevented but having information flow in real time from hundreds of different sites around the world that constantly helps us get in front of safety has definitely improved efficiency, quality and productivity,” says Roach. “And that translates into better finances.”