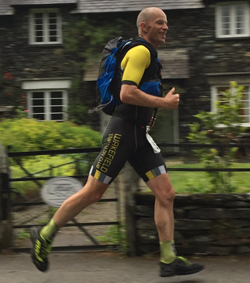 Congratulations to Robin who successfully took on the challenge of Triathlon X in the Lake District in June. For those that know Robin you will know that he enjoys a challenge but Triathlon X is regarded as the world’s toughest Ironman triathlon, so this was a particularly big challenge. Starting at 4:00am in the morning the 2.4 mile swim in Lake Windermere was followed by a rain affected 112 mile bike ride which forced some competitors to retire.  The bike route takes in all of the steepest road climbs in the Lake District including Hardknott Pass which at 33% is the UK’s steepest pass.

After the swim and bike ride there was just the small matter of a 26 mile run that involved scaling the highest peak in England, Scafell Pike. Of the 111 competitors starting 87 completed the triathlon and Robin was 37th overall finishing in 15 hours 57 minutes.

If you fancy competing yourself, you can sign up for the 2019 race here.