Return of the Zombie Apocalypse

You may recall that last year we looked at a model that showed what would happen if there was a zombie outbreak in Wakefield. One of our analysts, Greg Olenski, created this to present to us during his interview. It turns out Greg isn’t the only person preparing for a zombie apocalypse, this work was originally published in 2015 and shows what would happen in different areas if there was a zombie outbreak in different areas within the USA. In summary, run to the hills!

Starting in a big city like New York or Atlanta means you are basically screwed from the start in the event of a zombie epidemic there, according to Alex Alemi, a graduate student at Cornell University who was part of the research team.

You are much better off starting farther away from people, they say, which gives you a better chance of avoiding infection. Ideally, you’d escape to an almost empty region like the Rocky Mountains. Take a look at the interactive model to see how each area would get survive.

“I’d love to see a fictional account where most of New York City falls in a day, but upstate New York has a month or so to prepare,” Alemi said in the APS press release.

Authentic disease modelling
Alemi and colleagues used standard disease models to estimate the zombie infection rate around the US, assuming humans would need to be infected by a zombie bite (of course). Also following standard protocol, zombies travel only by walking and wouldn’t die naturally but would need to be “killed,” presumably with a well-placed blow to the head.

Essentially, they used a realistic model that’s very similar to the way epidemiologists calculate the spread of other viruses, but using fictional parameters unique to zombies. They did make some assumptions, including a transportation infrastructure collapse. It’s hard to imagine airports staying operational for long in such a scenario.

As you can see, the Rockies are the safest place to be in this fictional scenario — sparsely populated and difficult to reach.

And big population centers are the worst place to start the outbreak. About 28 days later (coincidence?), they become safer as the areas that surround them become more dangerous.

Though of course, as Terrence McCoy pointed out at The Washington Post, if a large percentage of the population flooded any area, the risk of infection there would skyrocket.

The statistical research was inspired by a reading of Max Brooks’ “World War Z,” a book that is better than the movie that was based on it. 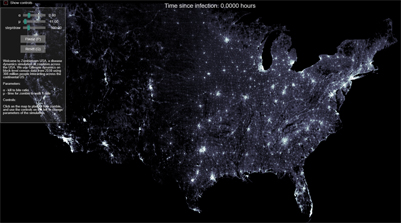 How it works
Alemi and coauthors modeled out the population centers of the country and then assumed certain possible interactions, with an element of randomness. A zombie might bite and infect a human or the person might escape or kill the creature. And of course, the undead shamble onward.

Also, in reality, an outbreak probably wouldn’t start all over the country, and there are some variables. The undead might be more or less aggressive or more or less mobile.

So the research team built an interactive model that allows you to simulate an outbreak, picking a starting point, a zombie-bite to zombie-kill ratio, and whether the zombies are fast or slow.

As you can see in this model, a fast-zombie outbreak in New York City would be devastating within 24 hours.

Not looking good. More complex variables would be interesting, though.

“Given the time, we could attempt to add more complicated social dynamics to the simulation, such as allowing people to make a run for it, include plane flights, or have an awareness of the zombie outbreak, etc.,” Alemi said in the press release.

While zombie scenarios might seem like something a bit silly for researchers to spend time on, public health researchers tend to like these sorts of scenarios since they help educate people on how diseases spread. The CDC even maintains a “Zombie Preparedness” page