Packt Publishing, publisher of software learning resources, has revealed the results of its2018 Skill Up survey in a new report—including the top programming language for data in 2018. The results here don’t necessarily reflect our own anecdotal evidence where SQL seems to still be the dominant tool but we have looked into Python and R ourselves and it would appear that more and more data analysts are moving to these tools.

Here are some of the key findings from Packt’s report:

Now, let’s look at these observations in more depth.

Python Continues Its Ascension As The Top Dog
Python has once again been voted the number one language of data. It has over double the uptake of its traditional rival R, which lags behind it in third place.

Python is easier to learn than R. R can definitely be tackled, but Python is more optimal to learn if you’re newer to programming. The fact that an easier language is ranking similarly in popularity to R shows just how quickly the field is growing and opening up to newcomers. (On the other end of the spectrum, it’s worth noting that once you grasp the foundations of R, you’ll have an easier time figuring out the more complex levels of it. As a result, advanced programmers often favour R.)

Python’s ease of use, powerful tools and libraries, and use outside of the data field make it almost mandatory to know and use in 2018. 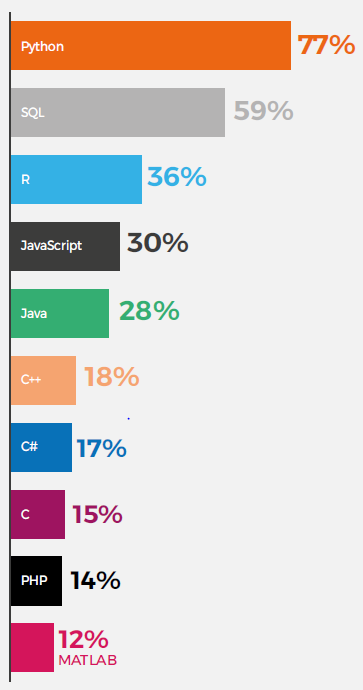 Top responses regarding which languages were used with Python were SQL, JavaScript, and HTML/CSS. Python is particularly flexible to use alongside other languages.

Unsurprisingly, 52% of Python developers claimed that they were in a full-time job. So developers out there, if you’re well versed with Python, you’re more likely to be hired.

The Top Libraries, Tools, and Frameworks of Data

Microsoft Excel continues to be a highly popular tool for data analysis, especially when dealing with data with hundreds and thousands of records. Almost 53% of the respondents prefer having Excel in their analysis toolkit for their day to day tasks.

As per the survey results, eight of the top ten most used data tools are derived from or utilise Python. Python finds a wide adoption across all spectrums of data science – including data analysis, machine learning, deep learning, and data visualization.