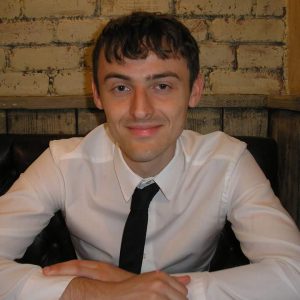 Hi, I’m Jonathan. I was born in Skelmersdale (the second largest town in the North West without a train station) and since then have lived in various places around the north. I studied Maths for 4 years at Durham University and came away with lots of knowledge of pure mathematics; utterly useless in any actual career setting. I then wanted to pursue a job where I could share my passion for mathematics, so decided to become a maths teacher. It was very rewarding at times but in the end the I decided to leave to pursue a career that involved a little less marking.

I decided to join DataConsulting because it is  a great place to apply my strong mathematical reasoning skills. Also, I hoped writing a script that successfully runs and does exactly what I wanted, would give me the same adrenaline rush as working through an intricate mathematical problem and getting the right answer at the end.

Outside of work I have been incredibly lazy whilst teaching, but all my life I have trained in karate and I intend to start training again soon. I have a second dan black belt and was the club captain in my final year at university. I have taught karate classes in the past and competed in numerous tournaments at different levels. I’ve also just started playing football and going to the gym so hope to soon get my pre-teaching fitness back.