I’ve always considered my birthday of 7th January to be a bit of a naff date to have my birthday as most people are recovering from Christmas and New Year and not really in the party mood.  Also, dry January has become quite popular in recent years meaning the appetite for joining me for a celebratory drink has waned somewhat.  This year I felt quite fortunate that I was able to celebrate my birthday in the fashion I wanted with no restrictions!  People who I was often jealous of with birthdays in the Spring and Summer months have had to settle for very low-key celebrations often over the virtual medium of platforms such as Zoom.

This year happened to be my 50th birthday and my wife Sarah certainly scored top marks when it came to my birthday present.  After giving me a number of ‘smaller’ presents she gave me a 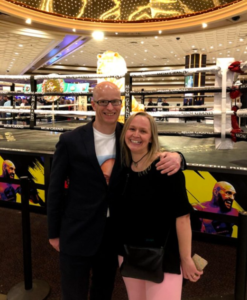 rather small nicely wrapped package which she added was my ‘main’ present.  Intrigued, I unwrapped the present and found that it was a pair of cuff-links in the form of a pair of boxing gloves.  I was slightly underwhelmed but put a brave face on and said that they were fantastic and would be a great addition to my cuff link collection.  Sarah then said push down the cuff-links and see what’s underneath.  The cuff-links spun round to reveal a post-it note stuck underneath which said “TWO TICKETS TO SEE THE TYSON FURY FIGHT IN LAS VEGAS!!!!”.  Needless to say I was gobsmacked and lost for words at seeing this.  Myself and Sarah were going to Vegas to watch Tyson Fury fight Deontay Wilder for the World Heavyweight title.  I won’t go into the whole detail of my trip to Las Vegas but myself and Sarah had a fantastic time and Tyson won too which was an added bonus.  It all happened before the lockdown restrictions so feel very lucky to have fitted such an amazing trip in beforehand.

Not quite as significant a milestone but nonetheless a great achievement in often challenging times, DataConsulting at 13 years old has become a teenager! Many thanks for all those that have supported us along the way and we look forward to working with you in the future.