With Euro 2020 now well and truly over, football did not come home, instead it went to Rome, but what does the data tell us about the four teams who made the semi-final. Did they deserve their place and did Italy deserve to win the tournament overall? Here’s what the data says:- 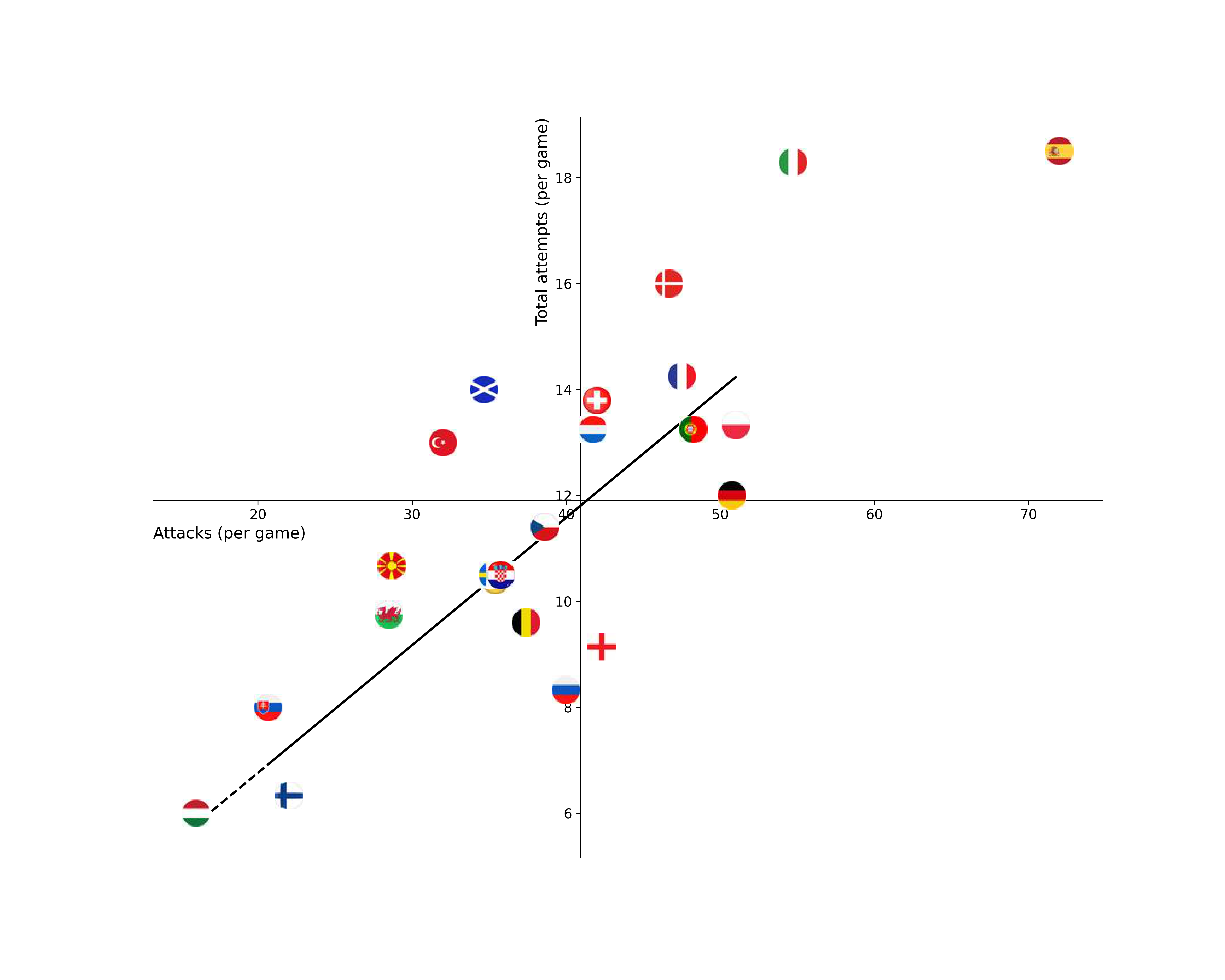 The data shows that Spain were the most dominant and attacking team of the tournament, with an average of 66.8% possession, which was almost 10% more than the next best team (Germany). Spain dominated in attacks per game producing almost 20 attacks more than the next closest team (Italy). They also finished as joint top scorers in the tournament, alongside Italy, despite having played one game less and produced the most attempts at goal than any other side with 18.5 attempts per game.

The main issue Spain had was turning their dominance into goals. Their conversion rate of 30% was easily lower than Italy’s 36% and even lower than England’s at 35% too, which suggests they just were not clinical enough. This point is further strengthened when considering the data gathered on their strikers; Dani Olmo, for example, had the most attempts on goal in the entire tournament but failed to find the back of the net and Gerard Moreno, who had the third most attempts on goal for Spain, also failed to find the target, hence their lack of cutting edge.

Overall, Spain may have struggled in their group stage, only managing draws against Sweden and Poland, respectively, and with converting their dominance into victories too, but the data suggests they were worthy semi-finalists.

Italy, spoilers… the ultimate winners, also showed their attacking intent throughout the tournament, delivering the second highest attempts per game and second highest attacks per game behind only Spain. Italy also finished joint top scorers with 13 goals. The data suggests that Italy were just a more complete side when compared to Spain. Not only did they match Spain’s attacking output, but they did so whilst having a tight defence, finishing the tournament with the second most clean sheets (3) conceding just 4 goals, compared to Spain who managed just 2 clean sheets and shipping 6 goals, despite averaging almost 67% possession.

Furthermore, Italy was very tactical in their approach. Having an experienced defence enabled them take control of games in their own style, which never really allowed the opposition a chance to dictate. Italy finished the tournament having committed the most fouls (93) and they put in the most successful tackles (99). Italy also received the most yellow cards (12) in the tournament.

All things considered, the data suggests that, combined with their overall flair, fluency and efficiency, Italy were by far the most complete team in the tournament, with their attack being just as effective as their defence and they, without doubt, deserved to take their place in semi-finals. 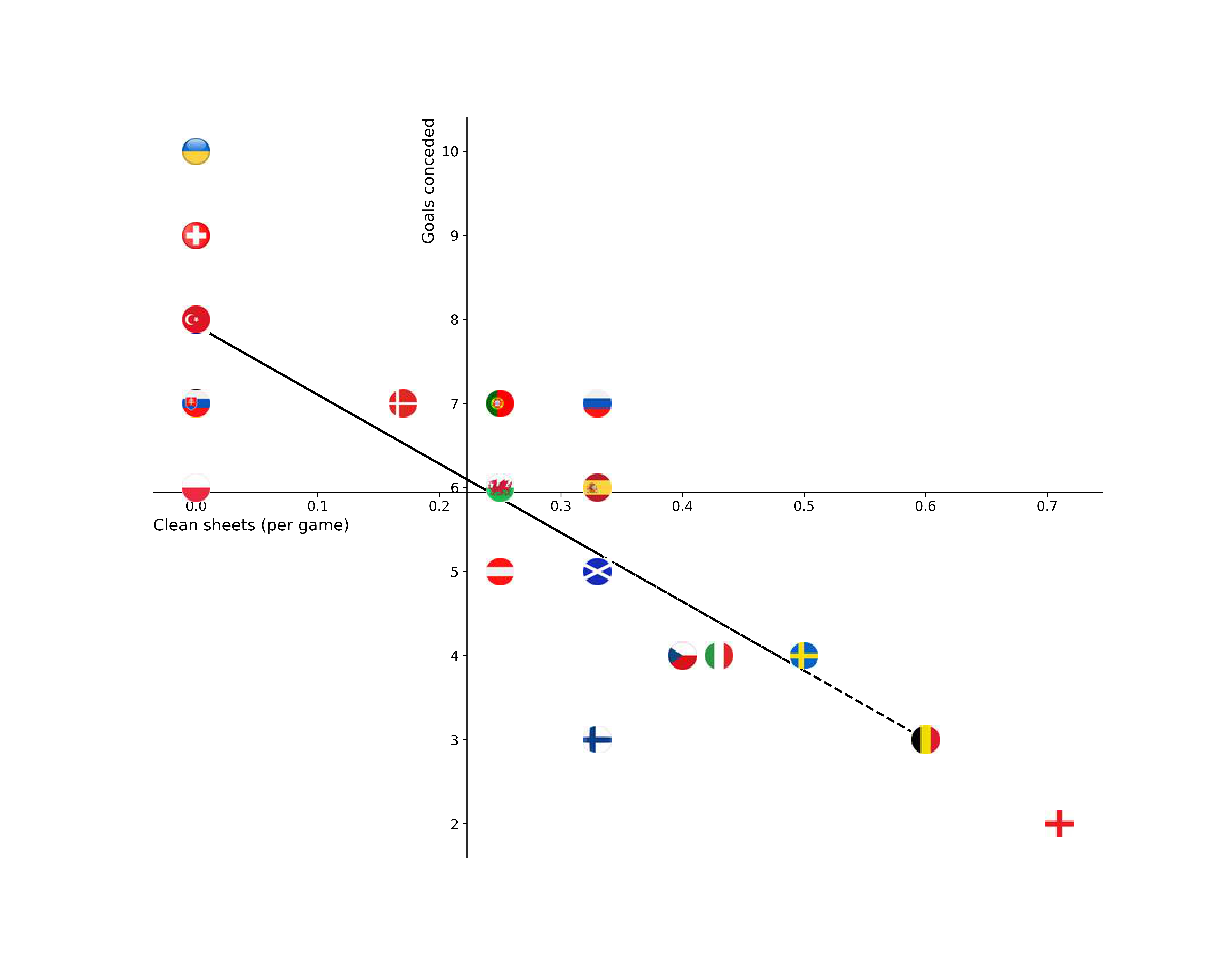 England built the foundation of their tournament on defensive stability. The data above shows that England were by far the most defensively sound team in the overall competition, conceding the fewest number of goals (even though they played the maximum number of games) and keeping the most clean sheets. Ultimately earning Jordan Pickford the Golden Glove and enabling England to reach their first international final in 55 years. England were way off the pace in attacks, possession and attempts when compared with the likes of Spain and Italy, but they still managed a comparable conversion rate of 34%, higher than Spain’s. England were content conceding possession and allowing teams to attack them, relying on a solid backline and an excellent goalkeeper to provide them with an opportunity to spring a quick counter attack.

Despite getting to the final, conceding the least amount of goals, and keeping the most clean sheets, surprisingly England’s Jordan Pickford was one of the tournaments busiest goalkeepers having to make 16 saves throughout the tournament, when compared to both Italy and Spain’s goalkeepers who both made 9 saves all tournament. It is clear to see England’s number 1 deserved his Golden Glove award.

To put it lightly, the data suggests England were a stubborn team, very frustrating to play against, but efficient at the same time, so it is no surprise they made it to the final. 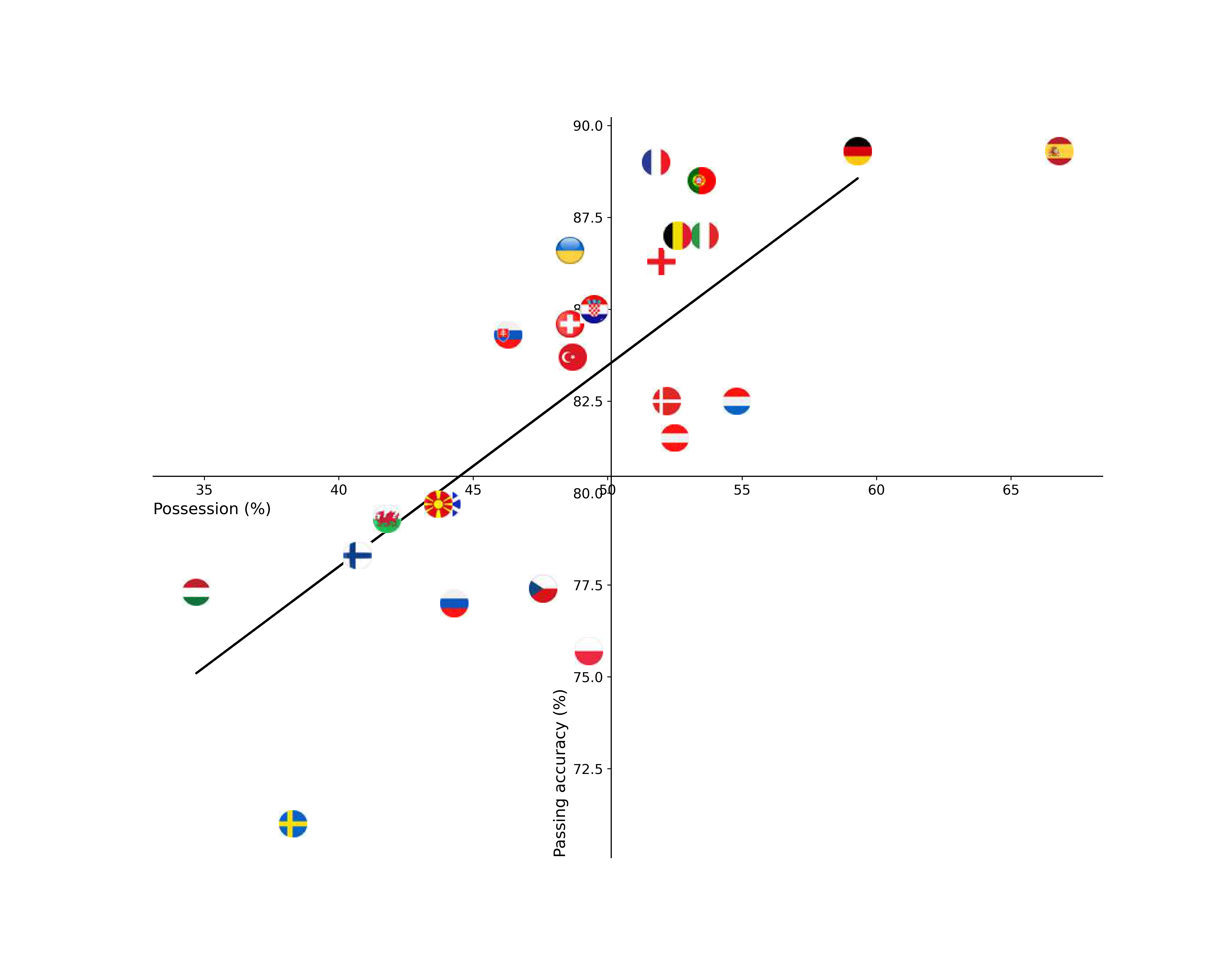 Now Denmark was a tough one. The data does not suggest that they particularly excelled in any specific area. Their attacks and attempts per game were good, but no better than a handful of other teams, defensively they conceded 7 goals and only managed to keep 1 clean sheet, which was below average. They also did not do anything special in possession or passing statistics. Their progress is even more intriguing when considering Denmark lost their first two games in the group stages, resulting in them narrowly scraping through to the knockout stages. If football was decided on statistics and data, then any one of Germany, France, Portugal, Switzerland, or Poland could have taken Denmark’s place in the semi-final and would not have been a surprise… thank goodness football is not decided this way.

Denmark’s case for being a semi-finalist is a curious one and is clearly due to intangible data. Football is a funny old game and sometimes does not always come down to things you can measure. We would like to think that a bit of heart, passion, and the mentality to succeed in the wake of such a horrific event to witness that was Christian Eriksen’s collapse in their first game provided Denmark with that extra 10% of something that is needed to go as far as they could.

The data suggests yes! Spain dominated possession and attacks, so their inclusion was no surprise. Italy was a complete force, with tactical game plans that demonstrated attacking and defensive intent. England dominated defensively and, although they were not quite as attacking as the other teams, were quite lethal in front of goal with a great conversion rate and finally Denmark showed the heart, desire, and the passion a team needs in knockout competitions. The ability to bounce back and push on after an unimaginable start to the tournament which is truly inspiring to all.

In an ideal world, Spain and Italy would have met one-another in the final as they were statistically the two better sides, but Spain’s poor start to the tournament and their failure to convert their possession and attempts into goals cost them first place in their group and therefore a place in the, arguably, easier side of the knockout phase. The fact it took penalties to decide Spain vs Italy and Italy vs England and extra time to decide England vs Denmark shows how evenly matched these four sides were, the most attacking team of the tournament came up against the most complete team, and the most passionate and determined team of the tournament came up against the most stubborn.

Like our England vs Denmark analysis, a project is only as good as the data and those handling it! In this case the volumes are low, and the correlations are not massively strong even though they are there to be seen. Ideally, we would have more information than we could deploy more rigour. However, that’s football for you and we enjoyed the challenge and the constant internal debates. The data we have available in business is a lot more reliable, predictable and we have a lot more of it. For that we are grateful.

If you want to know more about the sort of techniques we used in processing and analysing this data and how it could help you and your business then give us a shout. We are always happy to talk data… or data and football!