Competing for the Iron Viz Throne

The Iron Viz Feeder Contest is a data visualisation competition annually run by Tableau for a chance to win a FREE trip to the 2017 Tableau Conference in Las Vegas where you earn a spot to compete in the Iron Viz Championship. In order to win the feeder contest, you must get the highest number of mentions with a unique hashtag on Twitter.

This year the task was to use the brand new ‘spatial file connector’ in the new version of the software; the topic could be on absolutely anything of interest to us.

Want to know more about spatial files or how they work in Tableau? You can find out here.

Being the good sports that we are, Kathryn, Alex and myself decided to enter. You can read more about our entries below on street crimes, active people and even Donald Trump. If you are feeling brave, you can also attempt to navigate the visualisations to answer the questions! 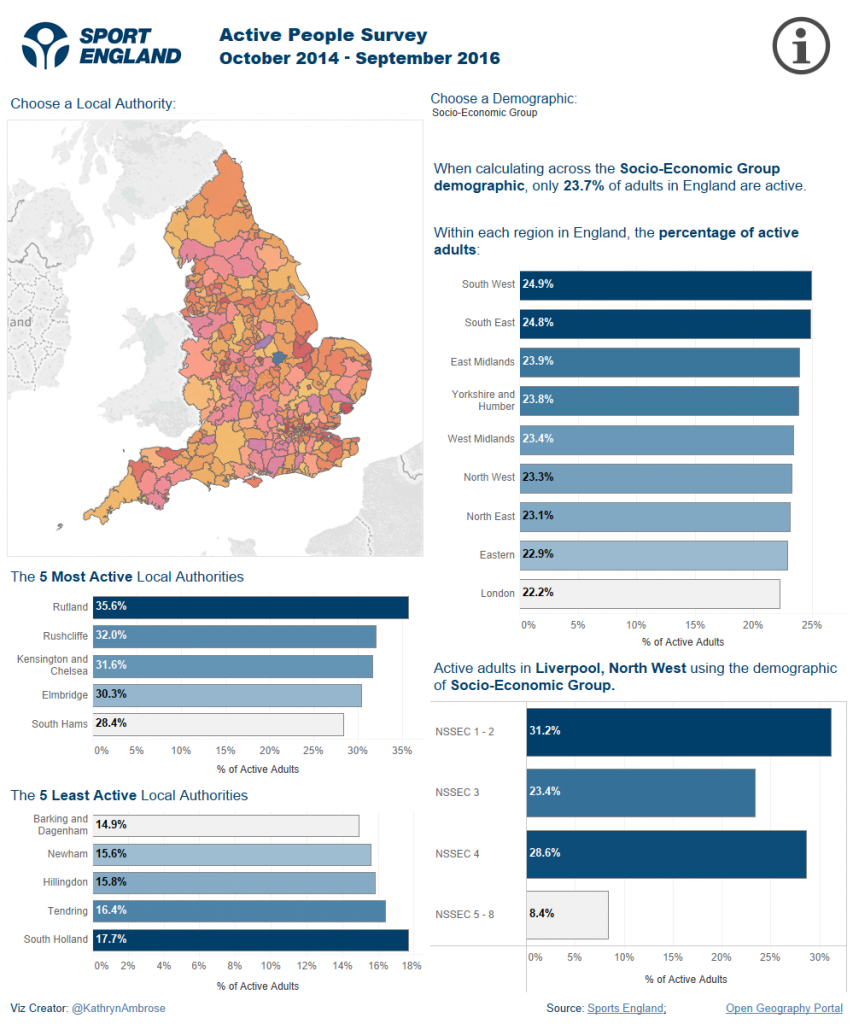 Kathryn chose to use a UK Local Authority spatial file supplied by the Open Geography Portal alongside the Active People Survey data from 2014 – 2016 from Sport England.

The top left shows a heat map of the percentage of active adults at local authority level. Red indicates relatively inactive, and blue indicates active. The bar charts on the left hand side, as stated, display the five most and least active local authorities.

In the top right of the viz, the ‘Choose a Demographic’ drop down option enables you to break down the survey data by age, socio-economic group and a few others. The chosen option will then filter through to the bar charts on the right-hand side; the first showing a breakdown of active adults by all regions and the second showing the breakdown depending on the local authority highlighted on the heat map.

Question: How active are female adults in Wakefield? 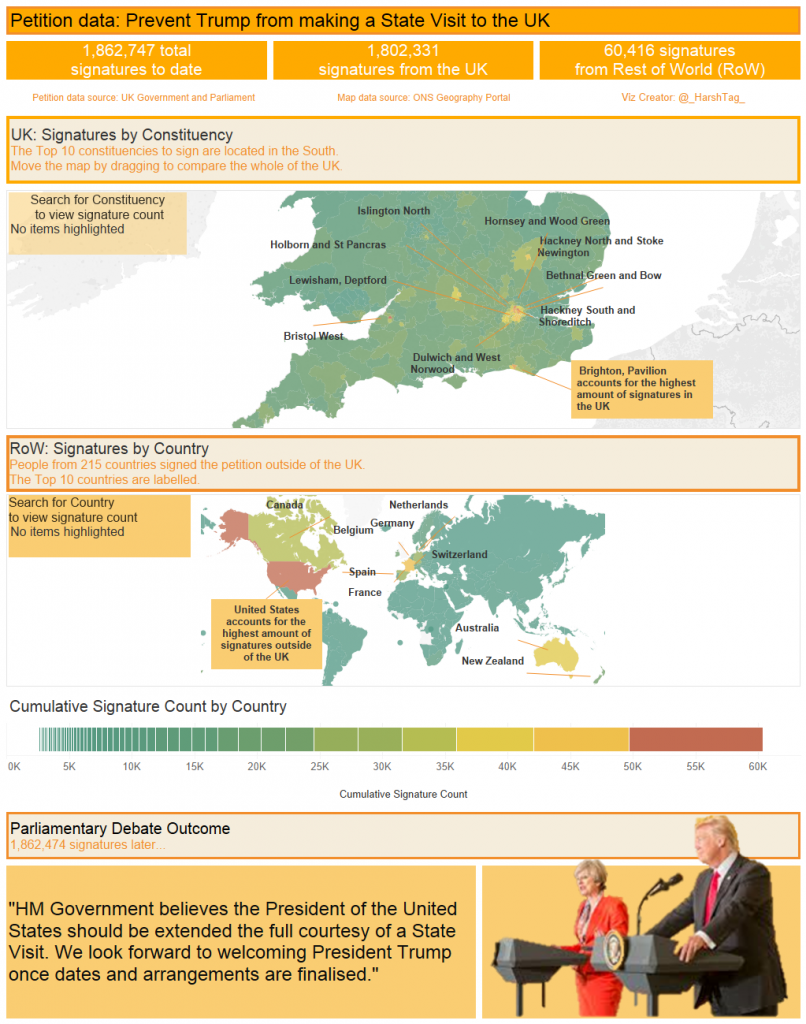 Since Trump has been the hot topic of conversation for some time now, I downloaded the data from the ‘Prevent Trump from making a state visit to the UK’ petition in addition to a shapefile containing UK constituency maps.

As I glanced through the data, I noticed this petition attracted signatures from around the world as well as the UK which led me to splitting my visualisation into two parts.

Directly under the signature headline totals, I chose to have a heatmap showing the count of signatures by constituency. Deep orange indicates high signature totals, green indicates low totals. The highlighter box enables you to search for a constituency, i.e. Wakefield, which will then display total signatures. By default, the top 10 constituencies to sign are labelled.

The second main section displays signature totals for the rest of the world on a heat map using the same colour scheme. Ironically, the US accounted for the highest number of signatures (10,703) outside the UK. The bar along the bottom shows a cumulative signature count by country.

Question: How many people from Argentina signed the petition? 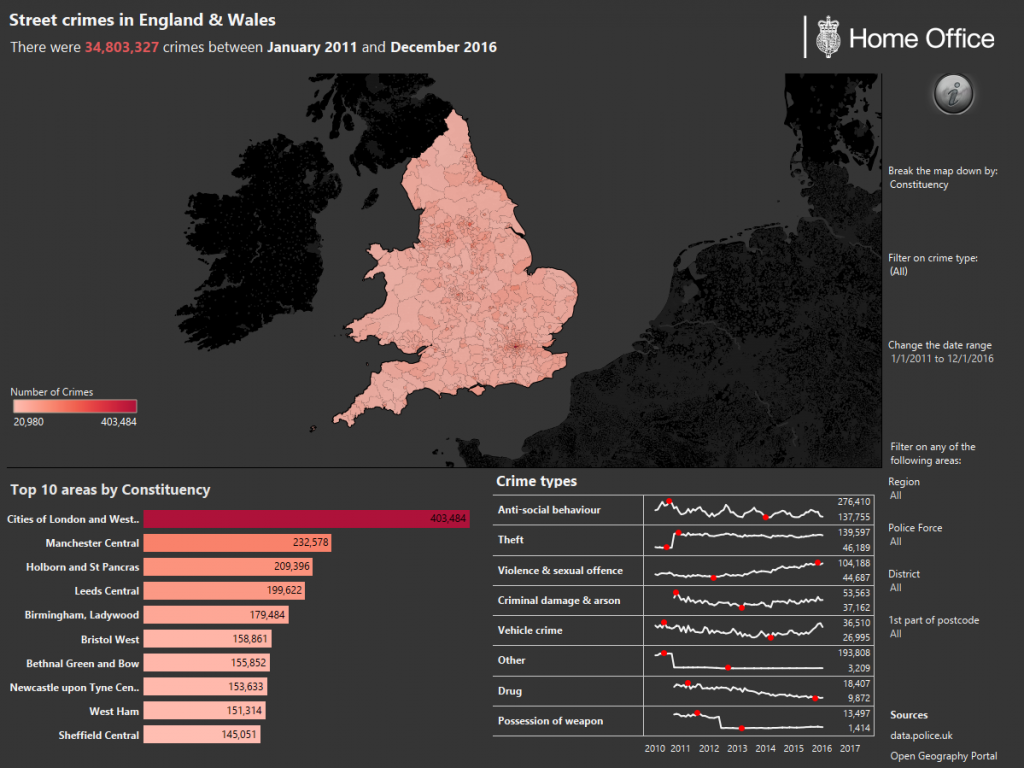 Alex downloaded street crime data (2011 – 2016) for England and Wales, making use of several shape files from the Open Geography Portal.

The options on the right-pane enable you to do break the map down by differing levels (due to several shape files behind the scenes), filter on crime type, change the date range, and also apply filters geographically. Depending on the options chosen, the map will display the relative information on the number of crimes. The darker the red, the higher the crimes.

The bar chart dynamically changes depending on the level the map is broken down by and other options to display the areas with the highest crime.  To the left of the bar chart are a series of spark lines against each crime type, the red dots symbolise the highest and lowest number of crimes. This area of the dashboard will convert into a date heatmap when a specific crime type is filtered for on the right pane.

Question: In which month and year were the highest number of anti-social behaviour crimes recorded for Lancashire?