As most of you will know, Euro 2016 is in its final stages and rather than write an article about the England team I thought it better to stay well clear of that and instead show some visualisations our very own Alex Psarras has made in Tableau which tell some interesting stories of the tournament so far…

Despite England’s dismay (last mention of that..), all of us at DataConsulting have been following the Euros closely and at the beginning we all put in some cash to enter a Euros Sweepstake; half of the winnings will be donated to the Wakefield Hospice, a local charity which cares for people with life threatening illnesses.  Alex created the sweepstake and I shall let you make your own conclusions on this but he happened to be dealt with Spain and France. I was not feeling all too confident receiving Wales and Portugal but to my surprise I’m now guaranteed a spot in the final. Anyway, on to Tableau…

Here at DataConsulting we’re passionate about the power of data visualisations as they allow you to present detailed results and findings in a very digestible way. Tableau is an incredibly powerful tool and we’re keen to use it on more projects ourselves. There’s a common theme that managers and partners do not want to look at large tables of results, instead they want to see concise results upon which they can make decisions… this is where Tableau can step in.

Euro 2016 has provided a great chance to play around with Tableau and show off what it can do. Here we provide a number of exported images from Tableau however when we publish the final results after the Euros the visualisations will be highly interactive for your enjoyment. Figure 1 is a general breakdown of how the teams have fared throughout the tournament. Based on this you could conclude that Germany are the favourites to lift the trophy given their goal difference and team value (all values were calculated using www.transfermarkt.co.uk as the source) 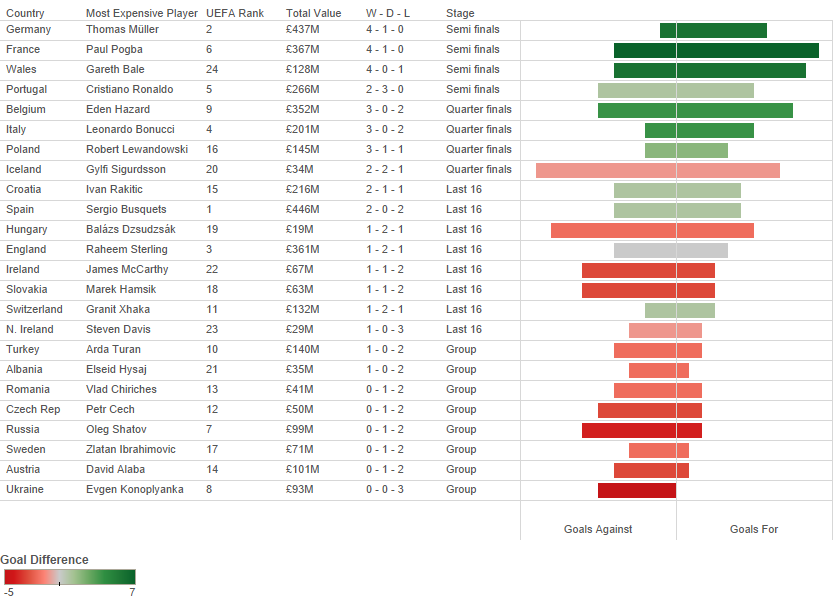 The above visualisation considers wins after extra time and penalties however the figure 2 separates results according to normal and additional time. Country form (2a) and common scores (2b) are calculated within 90′, while number of goals (2c) is sorted by time period. We left penalty shootouts out of these visualisations as the goals scored during them do not contribute to the overall number of goals scored. Interestingly Portugal have drawn every game so far in 90 minutes but are still vying for glory. Out of the 4 semi-finalists France appear the most in-form with 4 wins in 90 minutes and 1 draw. There’s been a total of 103 goals however not many high scoring games, the highest being France’s 5-2 defeat of Iceland. 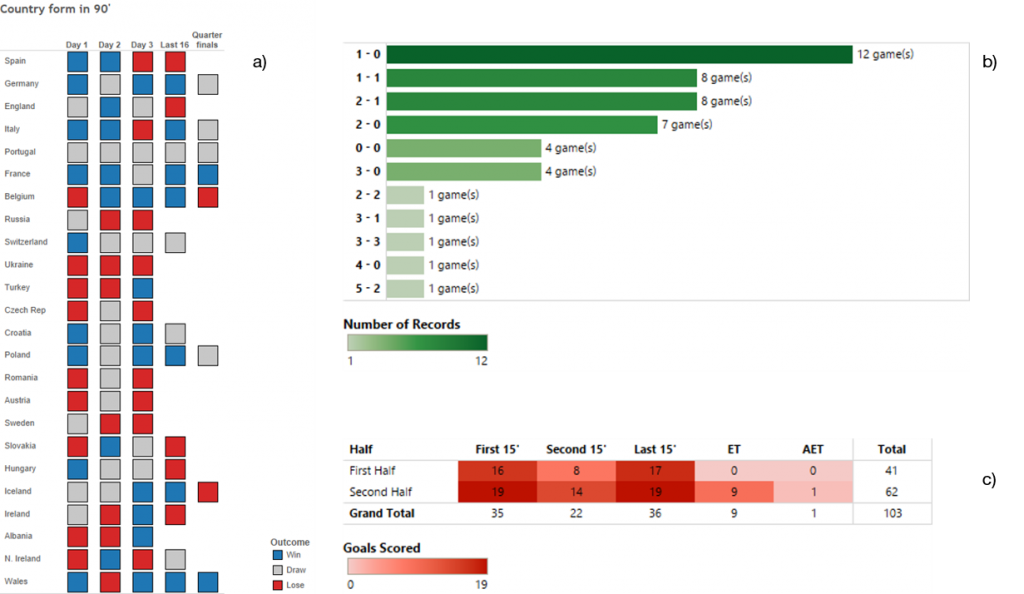 If sometimes you struggle to settle down before kick-off and watch an entire match throughout, you may find the following visualisation particularly useful (fig 3). By using average time of goals conceded and goal scored for each team it’s possible to visualise and estimate when the action will be. As most people have noticed by watching the Euros, the opening exchanges have generally been pretty cagey and so not many goals on average are scored in the first 20 minutes. By comparison it seems you can be pretty much guaranteed some excitement shortly after the second half has kicked off… so better to make sure you have made your cup of tea before then. 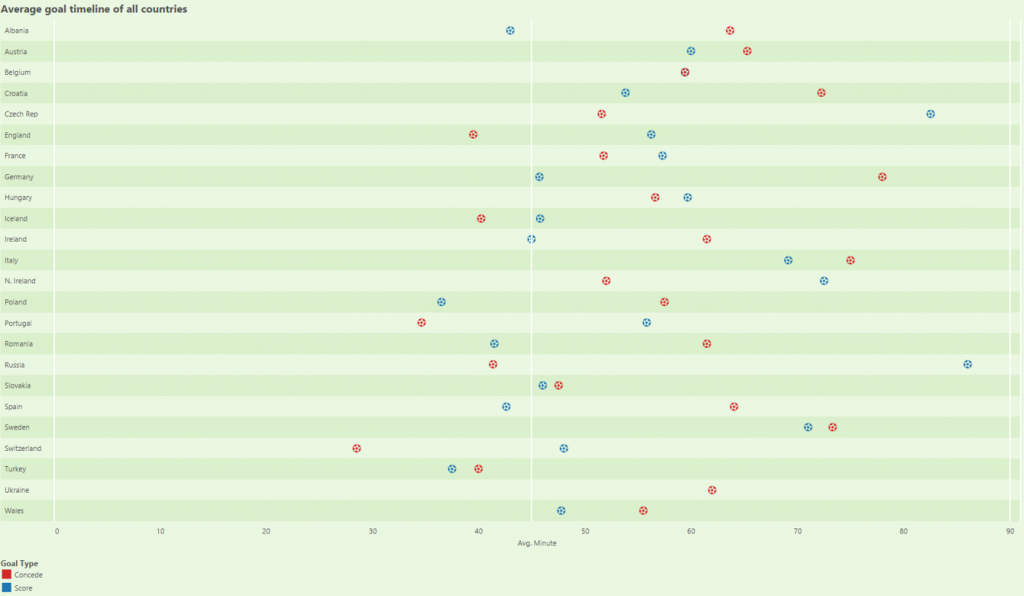 It probably comes as no surprise that Germany and Spain have had the highest possession of any team during the competition (fig 4). What is more surprising is the success of the Icelandic team given their possession. Although they fell to a very strong French outfit at the Quarter-Final stage, they fought admirably to get there, despite having the lowest average possession of any team in the tournament at 36% which goes to show that possession isn’t everything. 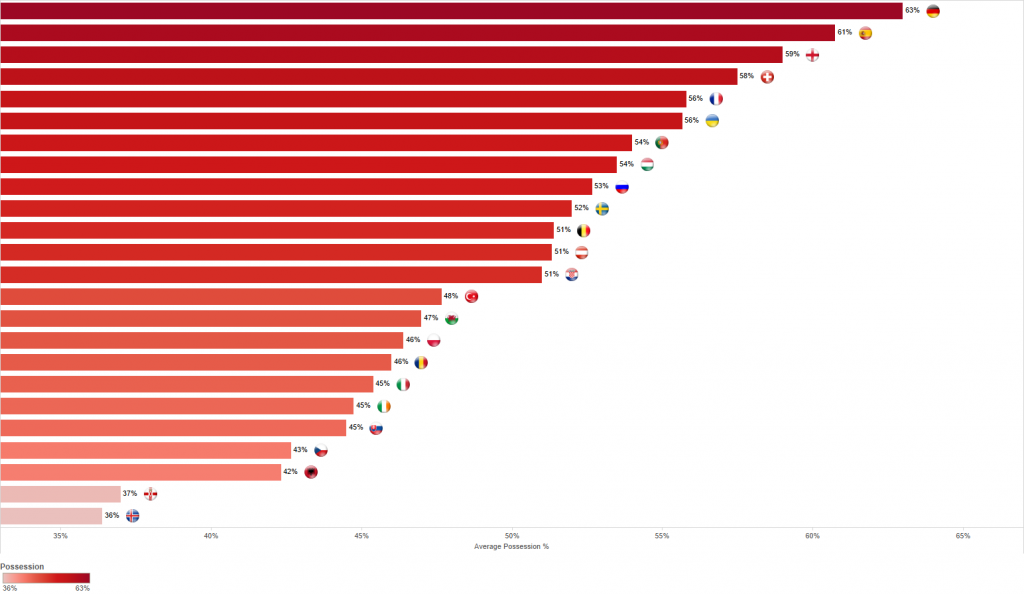 We’re now down to these 4 semi-finalists (fig 5) and this graphic indicates age of player as well as market value of the player (bubble size). What’s immediately apparent is how even the players are, in terms of their market value within the German and French teams, which shows how strong they are as a group. By comparison if we assume that market value is a function of player quality we could determine that Portugal and Wales are heavily reliant on Ronaldo and Bale respectively. One thing to mention is scale; you’ll notice that the Wales team bubble is noticeably smaller than the other 3 which shows how well they have done given the lesser market value. Based on their heroic performances it would be very unfair however to say that Wales have been a one-man-band. They have shown, much like Leicester City, that team spirit and togetherness is paramount, not only for football teams but for any team who wants to work together effectively. 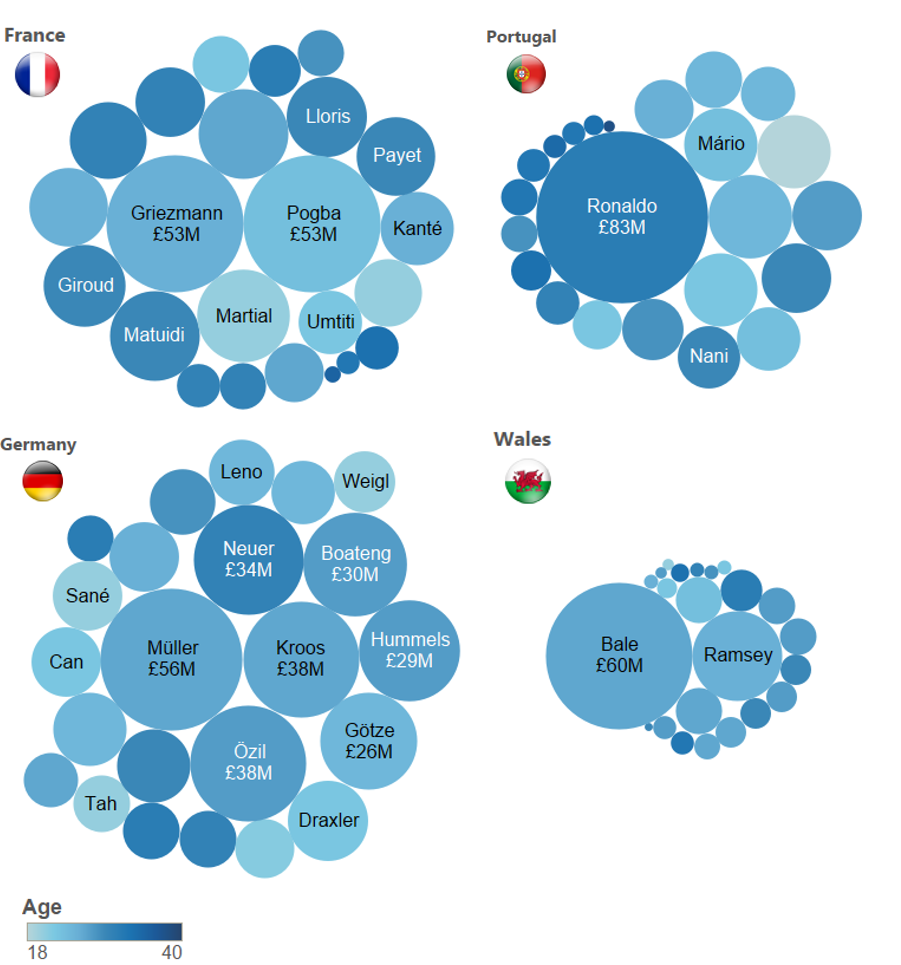 In this final visualisation of UEFA rankings and tournament rankings (fig 6) we’ve highlighted a few interesting results, one of which is of course the rise of Wales. From 51st in the UEFA rankings they now have the chance to write their name in the record books. Germany have been as consistent as ever while Netherlands and Greece who are relatively high on the UEFA rankings, failed to qualify for the tournament. 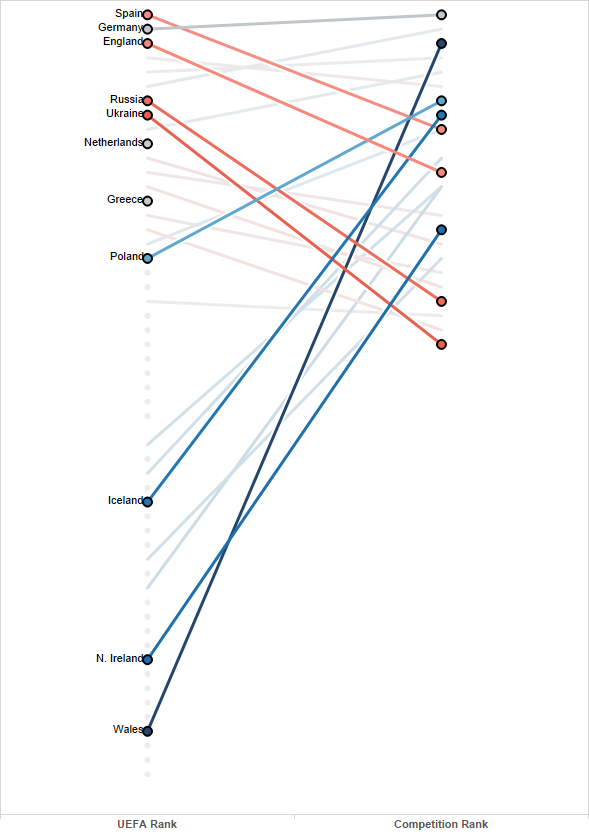 As you can hopefully see, Tableau is a very useful and flexible tool with which you can generate a variety of insightful and engaging visualisations. We shall be following up from this with an interactive selections of visualisations after the tournament has finished so if you would like to get involved and suggest any visualisations you’d like to see or have any questions, please feel free to contact us