April 8th marked the date of the first ACL User Group of 2016, it provided a chance for ACL users, both new and experienced, to come together and share their stories and hopes for how they would like to use the software.

Friday began particularly early for the members of DC attending the User Group, with a 5:30am train from Leeds passing through Wakefield at 5:44am. Joining myself on the journey to London were my colleagues, David, Sam and our new recruit, Greg.

This event provided a great chance for us to meet some new faces as well as catch up with the more familiar members. We arrived into King’s Cross just before 8, so had plenty of time to grab a well sought after breakfast and head over to the venue. The meeting itself was again hosted by Grant Thornton, which we are hugely thankful for; they provided a great room at the top of their building.

ACL User Group Chairman, Paul Fantham kicked off proceedings with a brief introduction before we received the first presentation from Chris Houghton on his journey with ACL throughout his career and how he has used ACL on various engagements. His talk was very well received and was followed by a Q&A session and a tea break, which gave us the opportunity to have a chat with everyone present about all things ACL.

Soon after our very own Sam Ford was preparing for his presentation on some expenses work he completed shortly after joining DataConsulting. Sam went into detail about how he used ACL to complete the work as well as the results he had derived from the analysis. Tests included checking for weekend transactions as well as looking at duplicate expense claims and Segregation of Duty violations. A particularly interesting result was that one individual had been approving their own expenses on 176 occasions. Despite the seemingly complex analytics, Sam reiterated that ACL is very simple tool to use, enabling you to gain valuable insight into your data.

A running theme from both presentations was the need to keep the analytics simple and start off small, generate some quick wins with some expenses work, for instance, then develop your use of the tool with some more complex projects.

After some closing remarks from Paul, attendees began to filter out at around 12:30pm.

We would like to thank everyone for attending. It was certainly one of the best turnouts we have ever had for one of these meetings and we hope to build on this for future events.

To those who couldn’t come, we would very much like to see you at future meetings and if there’s anything you would like to talk about in the meantime, please feel free to get in touch.

We are happy to send out the presentations from this meeting and if you have any ideas for what you’d like to see at a future meeting, or possibly present on, it would be great to hear your suggestions. 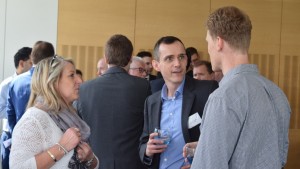