Version 9.3 of ACL Analytics introduced us to the Fuzzy Duplicates command and two new functions that make use of the Levenshtein Distance. This month we will have a look at identifying fuzzy duplicates in different tables by performing a fuzzy join.

Let’s have a look at the data set below. We have a set of employees and a set of vendors and we would like to identify matches between the two based on their names. 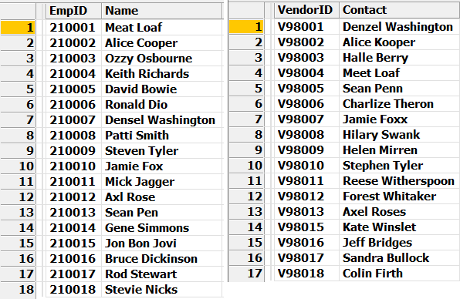 A simple join between the two tables on the “Name” and “Contact” fields will return no results. Prior to version 9.3, ACL users would perform a many-to-many Join with the FIND() or the SOUNDEX() functions to get a better match. However this would return quite a few false positives (for example “Alice Smith” and “Alice Jones”) and would still miss out obvious matches that have been misspelled (for example “Cooper” and “Kooper”). The reason why we do a many-to-many join instead of a simpler join is because it is the only type of join that allows us to filter on the secondary table. The filter we will create will compare the “Name” and the “Contact” fields using the LEVDIST() function.

Before we perform the many-to-many join between the two tables we need to take an additional step. We need a key field in both tables to join on that will always have the same value. For example, a computed field called “c_JoinKeyField” with a value of “X”. When joining the two tables on this new field, ACL will join EVERY record in the primary table to EVERY record in the secondary table. In this example, we have 18 records in one table and 17 in the other. An unfiltered many-to-many join on the “c_JoinKeyField” field will return 17 * 18 = 306 records in the new table. 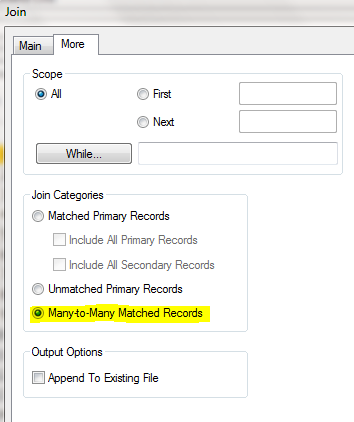 However before we execute the join, we filter using the LEVDIST() function. In the expression builder of the Join command we are now given the option to select fields from the secondary table. If we want to see only exact matches and all records where the Levenshtein Distance is 1 then our filter should look like the following:
LEVDIST(ALLTRIM(Contact), ALLTRIM(Employees.Name)) <= 1 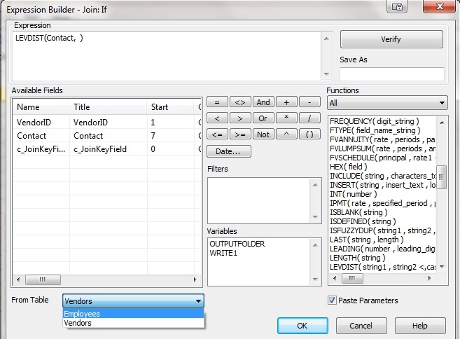 Adjust your filter as you see fit and execute the Join command. For a Levenshtein Distance of 1, our join will return:

By changing the filter so it includes all records with distance of 2 or less, our new join also output:

In the following script, we are going to use the example above with a few tweaks so it is easier to run as a script. This example has been written for ACL users that have attended an ACL 302 course or an ACL 303 course and that some experience in writting scripts.

* a join using the LEVDIST() function

COM ** Prompt the user for the Levenshtein Distance limit

COM ** otherwise, you could hardcode this step

COM ** Add the Levenshtein Distance to the resulting table

DISCLAIMER:
DataConsulting Ltd. provide the script “as is” and free of charge. DataConsulting: (a) Do not provide support for these scripts; (b) Make no warranties or representations, expressed or implied, with respect to the script, including its fitness for a particular purpose, merchantability, durability, quality or its non-infringement; (c) Do not warrant that the script is free from errors; and (d) Will not be liable for any damages (including, but not limited to indirect damages such as lost profits and lost data) arising out of the use of, or the inability to use the script. You agree to assume all risk of loss or damage arising from the use of the script.